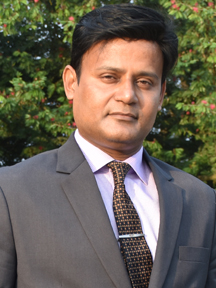 Dr. Bibek Chandra Sutradhar received his DVM  degree from the Bangladesh Agricultural University, Mymensingh in 1998. After graduation, he did Masters Degree in veterinary surgery at Bangladesh Agricultural University in 2000. He then joins as a Veterinary Surgeon at Patuakhali Sador under the District Veterinary Hospital, Bangladesh. After two years of field services, he joins as a lecturer at the Department of Medicine and Surgery, Chittagong Govt. Veterinary College in 2001.  Dr. Bibek spent 3 years at CGVC as a lecturer and then promoted to Assistant professor in the same department and focus on clinical services,  teaching and research. He was attained in clinical training at Tamilnadu Veterinary and Animal Sciences University, India in 2003. The government transformed  CGVC  to CVASU in 2006. Dr. Bibek was also attained in another training program on IT at New Delhi, India, in 2007. He continued his service for 8 years and then went to South Korea for doctoral study. Dr. Bibek was promoted to Associate professor at the same department in 2011. He did Ph.D. on osteochondral defect management by chitosan-alginate scaffold under the department of veterinary surgery at Chungbuk National University, South Korea in 2012. Dr. Bibek also served as a Director, External Affairs, CVASU from 2012-2015. Then he was promoted to professor in 2015 under the same department. He served as a head of the department from 2015-2017. Then he went to the USA for advanced training on veterinary surgery and got training from both Tuft Cumming School of Veterinary Medicine and Washington State of University in 2017. After coming back from the USA, he served as a Coordination, Higher studies and research, CVASU from 2018-2019. He also arranged and got training on clinical skills from the expert trainer from the University of Bristol in 2019.  Now he also served as a provost at M.A Hannan Hall, CVASU besides his teaching and research.

Dr. Bibek's clinical and research efforts have been concentrated in the treatment of urolithiasis, scaffold preparation for cell culture and animal modeling of joint diseases and treatment.

Office of the Chancellor